Overclocking is the process of increasing the clock speed on a system processor with the idea of getting higher performance. Given the time, this can be an interesting pursuit if you like pushing hardware performance to the highest level possible. With proper testing, this can be done once on a system and it will remain stable for 24/7/365 use for the life of the platform.

With a week off of work I decided to upgrade my aging i7-920 x58 platform to a Haswell based i7-4770k/z87. Overclocking this platform proved to have a steep learning curve, so I figured I'd share my general approach so others could save time getting started.

The general idea of the quick fail method (not sure if that's a name, but let's just pretend it is now) is to isolate each component of your build and then push it quickly to failure, then back it off and find the appropriate voltage/speed combo.


Make Sure you have applied your thermal interface material correctly and disabled the IGP in the BIOS(assuming you're not using it).  After your hardware is ready to go, we need to isolate components for testing. By doing so, we can more effectively ensure that each piece is stable before we combine them. We'll tweak/test in the following order:


Those are also listed in order of performance. The Uncore, for example, does not need to be synced to the core clock and is not nearly as important from a performance perspective.

Familiarize Yourself With Voltage and Temperature Norms


Before getting started, I recommend familiarizing yourself with the voltage/temperature behavior of you CPU at stock. To do so, we'll use the ADIA64 sensor display and the built in stress-test. (Note I don't recommend ADIA for stress testing other than here to gen heat/voltage) Launch ADIA64 and open the sensor display by expanding Computer->"Sensor". Take note of the CPU Core (vCore), CPU Cache (vCache, sometimes called vRing), VCCSA (or Vsa, System Agent), and CPU VRM (vRIN) settings, as we'll be targeting those for modification later. Launch the system stability test tool by selecting "Tools"->"System Stability Test" and click "Start". Watch the behavior of the voltages and take note of which are dynamic, and how they behave under load, and what they top out at. You'll need to know this for comparison purposes when we start adjusting. 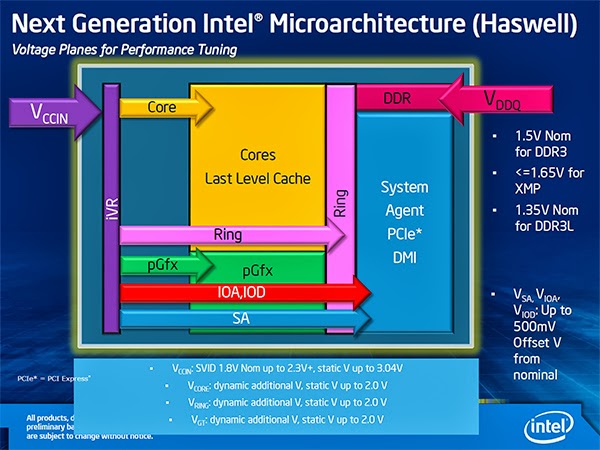 Most z87 motherboards offer three or four options for overriding voltages: Offset, Adaptive, Manual and Auto. Let's take a moment to discuss each:

Note that many have found that adjusting the LLC ramp is not recommended when using Offset/Adaptive.


Of all the tools I've tried, including ADIA64, Prime95 has provided me the most consistent and reproducible results. Prime seems to do a better job of bombing an unstable Haswell than a lot of other tools. For example, I was able to complete an ADIA64 stress test for two hours while the same setup locked up my system nearly immediately on Prime95SmallFFT.

More importantly, Prime allows for an effective customization of what portions of the CPU are being tested. SmallFFT will test the CPU and a bit of the cache(s) while Blend will effectively test the uncore and quite a bit of the system memory.


The Haswell has an internal throttling mechanism (Thermal Control Circuit) to protect the chip that cannot be disabled. This throttling reduces the speed of the processor until the temperature drops below the temperature specified by Intel. For more information on the throttling point (at most 100 deg C) see table 26 in this document from Intel.


AVX are a series of extensions originally introduced in the SandyBridge platform that facilitate accelerating certain math functions. The problem with AVX is that when utilized by stress testing programs they're generally used in an "unrealistic" way (much more often than one would see) generating substantially more heat than the non-AVX equivalent processing. This can be enough heat to trigger thermal throttling of the Haswell chip which invalidates stress testing because it causes the chip to run at a slower speed.

We'll start testing with AVX enabled because we do want to ensure the cooling solution can handle as much heat as theoretically could be thrown out, but if it causes the chip to throttle we will disable it. That will be covered below.


To ensure we can definitively find the failure point of the core we need to take the uncore and memory out of the picture. 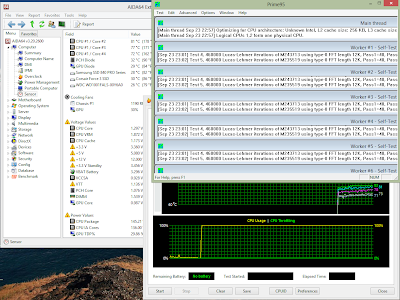 Use the same methodology listed above to clock the Uncore. The following modifications exist: the main voltage to change is vCache rather than vCore. To ensure the uncore is stable you'll need to run Prime95 Blend after you finish the SmallFFT test. Don't be surprised if SmallFFT is stable and Blend requires more voltage and/or lowering the multiplier.

Finally, clock your RAM using the correct voltage, speed, and timing adjustments. (Details outside the scope of this article) Use an extended Prime95 Blend test to finalize everything. Personally I'm not comfortable with anything less than 24 hrs for the final test, but opinions on that vary.


Obviously there is a ton here I'm not covering, but hopefully this information will save you time when starting your overclock. In some cases you may need to manipulate other voltages and voltage ramps, but those vary between motherboards so I won't touch on them.

Using this methodology I was able to get my water-cooled i4770k 24/7 stable @ 4.8Ghz/4/4Ghz Uncore without de-lidding. Not too shabby I should think. Finally I can get the performance I've been looking for when running Lotus 1-2-3. 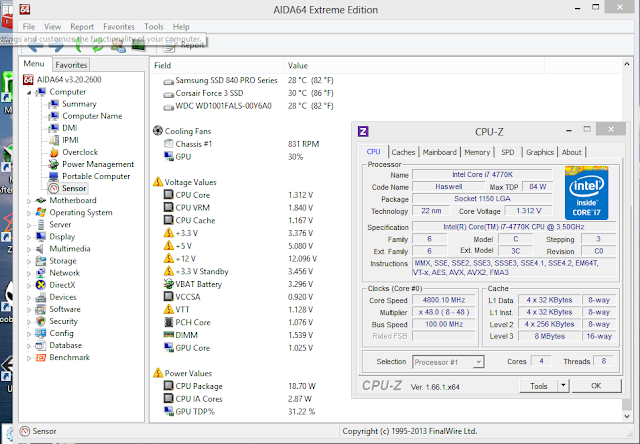 Appendix A: (If Needed) Disable AVX

Remember to re-enable when done testing by using the same methodology, only executing bcdedit /set xsavedisable 0 rather than 1.