An error with the installer causes the .NET NGEN (Native Image Generator) to run in an indefinite loop. According to one post, it may even cause registry bloat to the point where the registry reaches the maximum size and you may need to re-install the OS on the machine. :-/ That said, I haven't verified that claim.

Update: Microsoft posted the official fix (the same as the early one below) here.

There is another workaround listed on the site involving removing and re-installing the SQL management studio after patching, but this didn't work for me.

Here is the Microsoft connect article.

Given the potential need to rebuild the OS it would make sense to check your production systems for this problem now.

Update 2: In the Microsoft connect article, MSFT has posted a fix, but gave the following warning about using it: "Please Note: The patch should only be applied if you're on SQL 2102 SP1. If you have already applied a Cumulative update or an "On Demand" fix on top of SP1, please wait for the associated hotfix update to be made available.

I can't speak to the success of this patch; I'll be waiting for the associated hotfix.
Posted by Toby Meyer at 9:49 PM 2 comments:

You did it, time to celebrate. Now is when you should setup your DAGs, etc. and then move user mailboxes. Let me know if there are any questions.
Posted by Toby Meyer at 11:40 PM No comments:

When I'm not doing my job one of my hobbies involves archiving all my movies to my NAS and make them available to my HTPC for my wife to watch at the touch of a button. After upgrading to Windows 8, however, I noted the encoding tool eac3to no longer worked correctly with Arcsoft dtsdecoderdll.dll V 1.1.0.0. (The only version that correctly decodes DTS-MA 6.1 tracks) It seems that the this older version of the DLL is hard-coded to use the Microsoft VC DLL MSVCP71.dll, which will not register correctly on Windows 8. (It uses a newer version of VC out of the box) To work around this, you need to run eac3to in Windows 7 compatibility mode and copy the dlls to the syswow64 directory. (No need to register since the app calls them directly) Here's a step by step:
As stated above, there is no need to register the msvcr71 and msvcp71 files because the app calls them directly. Now, you can test it by opening a command prompt, navigating to the eac3to directory, and typing:

You should see the following:

This comes up at nearly every client I've been to, and I have yet to see any comprehensive article from MS on the topic. There is always quite a bit of confusion surrounding what you should set the preferred DNS servers to in the network adapter of the DNS server itself. Here are some quick guidelines to save you some time: 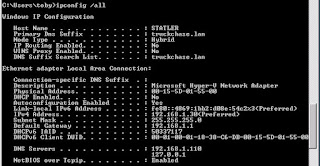 Where there another DNS server in the domain that would be listed BEFORE 127.0.0.1. Note that the DNS servers list does not include ::1 as the preferred server since I removed that with the command listed above.


Discussion: Some prefer to set the server's own DNS as preferred to reduce network traffic, and while I don't recommend that myself I will stress one final thing:
Whatever you decide to do with settings, be consistent. Lack of consistency inevitably costs time and money, usually when you don't have either.
Posted by Toby Meyer at 9:31 PM 4 comments: