RemoteFX is Microsoft's advanced desktop RDP solution based on technology acquired from Calista Technologies. It allows for the following functionality above and beyond standard RDP: 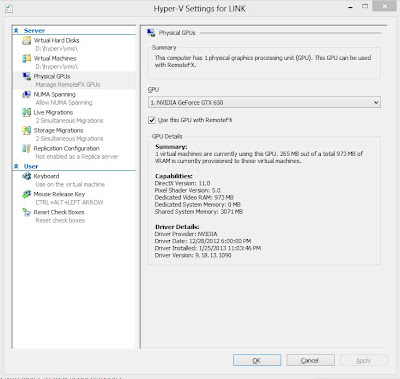 Alternatively for steps 5 through 7 you can use the following powershell cmdlets: 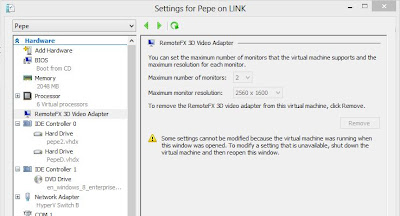 Note that unlike the previous version of RDP, you don't need to select your connection speed on RDS 8.0. So that said, the only configuration you really need in 8.0 can be done via GPO.

Microsoft makes some RemoteFX settings "Tweakable" via GPO. These settings can be found here:

Sound isn't working on the youtubes! : Seems like flash doesn't work correctly with audio redirection. HTML5 works though! Switch to the HTML 5 beta by going here.

Seems Slow: Make sure your color depth is set to 32bit. Based on my testing it seems that the codec favors full 32 bit color.

FAQ (By me of myself @ least, and by frequently I mean once until I answered them)

Microsoft: What is RemoteFX?
RDS Blog: RemoteFX Features for Windows 8 and 2012
Technet: Frequently Asked Questions and Troubleshooting Tips
RDS Blog: Your desktop will be a rich DX11-based experience, and your virtual GPU should be too
My Crazy Adventures with RemoteFX, Part 1

Some questions..Do you have any idea about if i can increase VRAM up to 1GB for each virtual machine. I'm using windows server 2012R2, with NVIDIA Quadro 5000 (2.5GB), and my guest operative system is windows 8.1, my application requiere high video performance (more than 800MB).

I appreciate your help

Excellent question; unfortunately I don't know of any way to get that much allocated to a given VM. The most I've been able to confirm having associated with a given VM is 265MB, which can be done by changing the #/Size of the maximum monitors setting in the VM settings to 2/2560x1600. You can then check the actual video memory by looking at the details of the host after starting the VM (right click host->Hyper V settings->Physical GPUs->Summary), or by using the PowerShell command Get-VMRemoteFXPhysicalVideoAdapter on the host and checking the "AvailableVideoMemory" after starting the VM in question.

I've been looking for a more functional way to do this myself but have yet to find anything. There are a couple articles on the 'net referencing a VM based registry setting, but that looks to be a non-functional value. Should I find a way, I'll make sure to update the article.

For the record, here is memory allocation associated with a few monitor configurations: